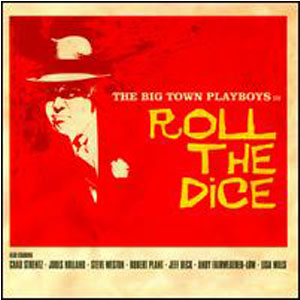 The Big Town Playboys are a six-piece acoustic British rhythm and blues revival group. Founded bu Ricky Cool and Andy Silver in 1984, they covered American music from the 1940s and 1950s, such as that of Amos Milburn and Little Walter.

Several of their songs also appeared on the soundtrack of the film, “The Pope Must Die”. They have performed as a backing band for Robert Plant, who contributed guest vocals on their album “Roll the Dice”.

Mike Sanchez, who fronted the band from the start, left the band at the end of 1999 to pursue a solo career. Presently, Ian Jennings is the only remaining member of the band. After Sanchez’s departure, the Big Town Playboys were fronted by another local London artist, Big Joe Louis, of “Big Joe Louis and his Blues Kings.”

In May 2005, the band teamed up with Gary Brooker and Andy Fairweather Low to give a charity concert called “Aftershock” in India, with all proceeds to benefit victims of the tsunami caused by the 2004 Indian Ocean Earthquake.